The trek between Kalaw and Inle is a trek between two worlds: the former is a hilltown established by the british to bring the products of the shan state to the main port cities of the British empire in Burma, the latter is a group of towns living off the Inle Lake by means of fishing, mini industries, and floating farms.

On the way we'd find countless little villages that haven't change much since the agricultural revolution some thousand years ago.

Yishai, Tal's father joined us for our first two weeks in Myanmar and would join us for this three days adventure through the mountains. 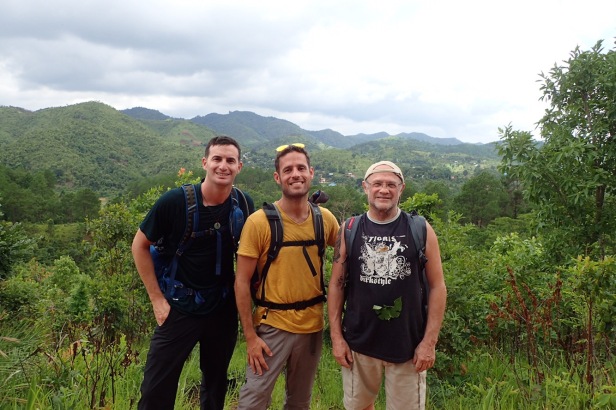 After much deliberation and research we decided to go for the obvious recommendation in most travel guides and choose Uncle Sam’s travel agency to lead the way. The moment we entered their offices we were to hear a well rehearsed and professional speech on the trek they’ve been leading for 13 years, since the area was open for tourists.
Fate’s bitch, and even when we’ve been trying to avoid Israeli big groups traveling together, we ended up being a group of 10 trekkers, 7 of them Israelis.
Our guide Kyau Lyin (or Yoline like the song goes he says) is a well spoken English speaker with a wide knowledge, no only about the plants and geography of the area, he also speaks the dialects of most of the neighboring tribes we were about to meet during the next three days.
We started by visiting the local market, where the inhabitants of the neighboring villages would meet to trade their products and purchase most of their needs. Only by walking through the market one gets inebriated with colors and smells, some not as pleasant, like dry fish or nag-pi, a shrimp pass made by burying it for a week in the ground.

As we walked past the town, the true colors of our guide started to show, when he started singing his broad repertoire, starting with Rihana, through Justin Bieber all the way to the Myanmar top hits, jokes and accurate accents impersonations of Americans and Brits were to come.

The most shocking and enlightening conversation we had with him was about our families, we told him about our parents, siblings and the different places where each one of us live and how often we meet each other, his answer was: "So you are poor?" In his point of view, wealth comes from the family, not money. He gave us something to think about.


For lunch we stopped at a small village where we were invited by the owner, a grown up woman in her traditional clothes, with a broad smile and few teeth. Two youngsters showed up in their bike were introduced by Kyau-Lyin, they were our cooks for the coming days, they will follow our steps and prepare our meals. The food was amazing, a great variety of local curries, chicken, fish, tea-leaf salads. All made with the local products grown by the same farmers that were hosting us.
The views of the valley and the terraced paddies showed up as we climbed the mountains and met the farmers working the land with little help save for their water buffalos. From sunrise to sunset, with no free days save family events and full-moon, they work incessantly the land. Most of them never got farther than 4th grade education and no prospects or will to leave the villages.
When we arrived at night to our destination in another village, we found what seemed like all the young guys playing bamboo-ball, sort of volleyball, but with the feet and hear. The smells of spices floated out of the small wooden houses in the air as we took our first outdoors shower, with the help of a well and a bucket.
On the next day we went on crossing more villages and fields of peanuts, potato, rice and more. At one point we came to the outskirts of a town where a big even was on preparations: big tents were erected and women gathered to prepare food. A wedding was about to take place between a couple of two different villages. More than a thousand people were expected from all the valley. People would take a day off work and come the party to congratulate and bring presents to the couple. We met the great great grandmother of the girl making it 4 generation in the family and a 5th soon to come. 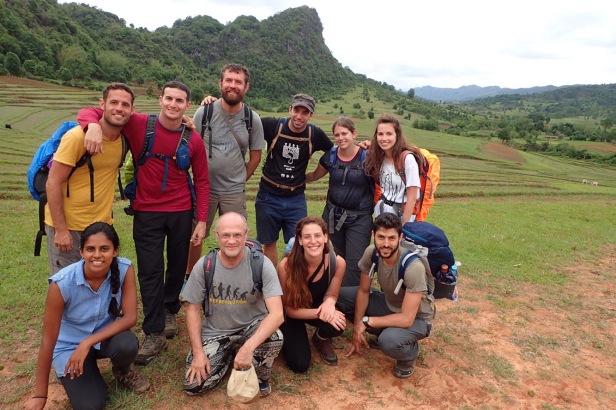 The food was out of this world again.
The last day our unique guide had prepared a surprise for us, he spent the night making a home-made skyrocket, to take to heaven our prayers for a water abundant wet season that is just around the corner. In the seccond attempt he succeeded and hopefully they'll get enough water for their crops.

When arriving to the lake we took a "longtail" boat, that floted among floating farms of tomatoes, eggplants and more.


Three unbelievable days that enriches us and return some blood to our legs.

What we are reading